Soil as a carbon store: There are five global carbon pools, of which the soil is the third largest after the oceanic and the geological pools. Globally, soils contain 2500 billion tons of carbon, and together with vegetation, hold 2.7 times more carbon than the atmosphere. Most soil carbon is in the form of soil organic matter which is mostly found at the soil surface. This organic matter is made up of dead plant and animal material at various stages of decomposition, substances synthesized by microbes and/or chemically from the breakdown products of decomposition, and living microorganisms and animals. Soils also contain inorganic carbon in the form elemental carbon and carbonate minerals, such as calcite, dolomite and gypsum.

Soils vary tremendously in the amount of organic matter they contain, with soil carbon contents varying due to a variety of factors such as vegetation type, climate, parent material, drainage, and the activity and diversity of soil biota. In general, however, the amount of carbon in soil is determined by the balance between carbon input from plant growth, in the form of dead plant litter (roots and shoots) and root exudates, and output via decomposition processes, burning and soil erosion. Hence, any factor that limits the amount of organic matter entering soil, such as a decline in plant productivity, or its breakdown in soil by the soil food web, will cause a build-up of organic matter in soil.

Figure 1. The amount of carbon stored in soil depends on the balance between: (1) carbon inputs (solid lines) from plants (dead and decaying shoot and root plant tissue, and root exudates) and manures; and (2) outputs (thick dashed lines) from the respiration of roots, their symbionts (e.g., nitrogen-fixing bacteria and mycorrhizal fungi), free-living soil decomposer organisms (bacteria, fungi and fauna), and from soil erosion and the leaching of dissolved organic carbon. Decomposer organisms and symbionts also influence nutrient supply to plants, thereby creating a feedback on plant productivity and hence carbon input to soil (small dashed line). Many factors determine the rate that organic carbon inputs to soil are decomposed and hence lost from soil, including the chemical composition of the organic matter, soil temperature and moisture, the abundance and activity of soil biota, and the availability of nutrients such as nitrogen. Although not shown here, soil animals (e.g. earthworms) can also promote soil carbon sequestration by redistributing carbon through the soil profile by channelling, mixing organic and mineral soil components, and by forming relatively stable soil aggregates and casts. DOC = dissolved organic carbon. 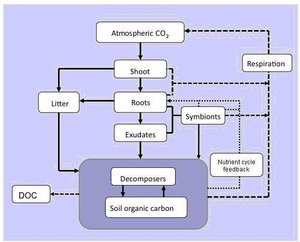 Soil biotic interactions and carbon cycling: Most plant production (80-90%) enters the soil as dead leaves, exudates, roots, wood, or animal wastes (Figure 1). Abiotic factors, especially moisture and temperature, act as major determinants of the decomposition of this organic matter, but soil microbes are the main agents of its breakdown because they produce enzymes capable of degrading recalcitrant plant-derived compounds such as lignin and cellulose. As a result, a large proportion (~ 50%) of soil respiration is sourced from the activity of heterotrophic microbes, the remainder being due to plant roots (autotrophic respiration) and associated mycorrhizal fungi. While a large amount of respiration can be attributed directly to heterotrophic microbes, biotic interactions between microbes and animals, including collembolans, mites, enchytraeids, isopods, and earthworms, can also indirectly stimulate rates of organic matter decomposition and respiration through a variety of mechanisms (Bardgett and Wardle 2010). However, the role of soil biotic interactions relative to abiotic factors that regulate decomposition processes varies greatly across biomes, and it has been suggested, but not yet tested, that decomposition may be especially susceptible to changes in soil biodiversity in species poor soils of extreme environments such as hot and cold deserts (Nielsen et al. 2011).

While soil respiration is typically separated into autotrophic and heterotrophic components, it is in reality driven by a continuum from roots with their autotroph-dependant mycorrhizal fungi, through to other rhizosphere microorganisms that are supported largely by recent photosynthates, to the heterotrophs that decompose larger macro-molecules in soil organic matter (Högberg and Read 2006). There is now much evidence that the autotroph-linked component of this continuum, which is fueled by recent photosynthate, acts as a key driver of carbon cycling in soil. For example, recent studies show that increased flux of carbon to roots and soil, for example caused by elevated carbon dioxide, can stimulate microbial activity and the breakdown of organic matter, thereby leading to carbon loss from soil (reviewed by Bardgett 2011). In general, there is growing acceptance that transfers of recently fixed carbon from roots to the belowground subsystem serve as a major driver of soil food webs, and that this has major consequences for carbon and nutrient cycling in soil.

Figure 2. Direct and indirect effects of climate change on soil microbial communities and feedback to the Earth’s carbon dioxide production. Direct effects include the influence on soil microbes and greenhouse gas production of temperature, changing precipitation, and extreme climatic events. For example, increased temperature can stimulate microbial activity and carbon dioxide production. Indirect effects result from climate-driven changes in plant productivity and vegetation structure, which alter soil physicochemical conditions, the supply of carbon to soil in the form of root exudates and litter, and the structure and activity of microbial communities involved in carbon cycling. Autotrophs, such as plants, can convert carbon dioxide into organic carbon, whereas heterotrophs do the opposite. DOC = dissolved organic carbon. 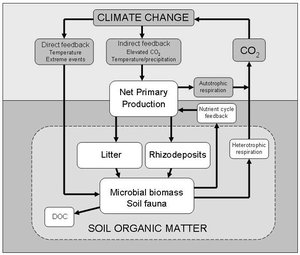 Soil carbon and climate change: There is presently much concern that climate change will enhance the decomposition of soil carbon, potentially shifting soils from being sinks to sources of carbon dioxide and thereby accelerating climate change. At the same time, there is also much debate about the possibility to increase the amount of carbon sequestered in soil the atmosphere, and hence mitigate climate change. Recent studies reveal that both the loss and gain of soil carbon are strongly regulated by plant-microbial-soil interactions. Climate change can impact on soil carbon in many ways, both direct and indirect (Figure 2). For direct effects, one of the most commonly discussed ideas is that global warming will accelerate rates of heterotrophic microbial activity, thereby increasing the transfer of carbon dioxide from soil to the atmosphere, thus creating a positive feedback on climate change. However, although it is well known that temperature is an important determinant of rates of organic matter decomposition, the nature of the relationship between temperature and heterotrophic respiration, and its potential to feedback to climate change are far from clear (Davidson and Janssens 2006).

Recent studies also reveal the potential for strong indirect effects of climate change on soil carbon cycling, i.e. responses mediated via plants. Several mechanisms occur here which can broadly be divided into two: first, as mentioned above, rising atmospheric concentrations of carbon dioxide indirectly impact on soil microbes via increased plant photosynthesis and transfer of photosynthetic carbon to soil; and, second, long-term climate change-induced, changes in vegetation composition alter the amount and quality of organic matter entering soil, and other soil properties, thereby affecting the belowground decomposer food web. Recent studies show that both of these mechanisms can have significant consequences for the carbon budget of terrestrial ecosystems under climate change (reviewed by Bardgett 2011). In general much remains unknown about this topic, and an important challenge, which is a key feature of EcoFinders, is to better understand the role of plant-microbial-soil feedbacks in modifying soil carbon dynamics.

Plant-soil interactions and climate mitigation: As mentioned in the preceding section, a major challenge facing scientists and policy makers is to increase the amount of carbon sequestered in soil in order to mitigate climate change. A range of land management strategies based on the intervention of higher plants and soil decomposition processes have been proposed to enhance carbon pools in agricultural soils (Woodward et al. 2009). These include: the adoption of no-tillage arable agriculture, which minimizes soil disturbance and the breakdown of crop residues; the conversion of arable land to grassland, which causes a build-up of organic matter at the soil surface; and the use of cover crops in rotations. In nutrient poor situations the addition of fertilizer nitrogen has also been proposed as a way to enhance soil carbon storage due to the resulting increase in plant production and litter return to soil, and through suppressing microbial decomposition of recalcitrant organic matter. Evidence for this, however, is mixed, in that nitrogen fertilization of agricultural soils has been shown, in some situations, to enhance organic matter decomposition. Also, some of the above strategies for soil carbon storage could have trade-offs; for example, no till agriculture has been found, in some situations, to increase soil emissions of the greenhouse gas N2O - as a result of increased denitrification in compacted soils - thereby offsetting some of the benefits of increased soil carbon storage.

Another possible way to enhance soil carbon sequestration involves the manipulation of plant-soil feedbacks, especially in grassland. For example, recent studies show that increases in plant diversity and the introduction of certain plant species such as legumes into mixed grasslands, can reap benefits for soil carbon sequestration. The mechanisms involved in plant manipulation of soil carbon sequestration are complex and involve many types of biotic interactions between plants, their symbionts, and decomposer organisms. However, it is becoming clear that a research effort focusing on plant traits (and especially of roots), as will be done in EcoFinders, offers a potential way forward for understanding how plant-microbial-soil interactions might be manipulated to enhance soil carbon storage.