This type of satellite is classied as a 1U Cubesat, which essentially is termed a miniaturized satellite, scaled to the units of 10 cm x 10 cm x 10cm  and must weigh no more than 1.33 kg. This is a universal standard set for the 1U system which can be upgraded to 3U, 6U and so on by expanding the frame with additional cubes. The Delphini-1 is currently expected to be equipped with a core payload, seen below. Most of the satellite components are provided by GomSpace. 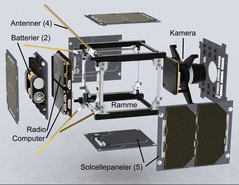 The standards for the Cubesat design was initiated by California Polytech and Stanford University in 1999 in order to enable educational institutions to participate in the space program in a relatively easy and inexpensive way, involving students along the way. The basic 1 Unit Cubesat (1U) is a 10 x 10 x 10 cm cube weighing a maximum of 1 kg. The initiative has been very successful and has been expanded over time enabling larger and heavier satellites to be launched, based on the same basic concepts, but e.g. 3U or 6U (30 x 20 x 10 cm). Nanosatellites can be placed into orbit from the International Space Station or as piggy-back launches on rockets carrying larger satellites into space from USA, Russia, India or Japan. Commercial companies are also using the concept e.g. for launching swarms of small satellites for communications or for camera surveillance.

ESA, the European Space Agency has been supporting the educational branch of the Cubesat launches by providing assistance in testing and occasional free launch opportunities, including AUSAT-1. Our satellite will be carried to the ISS on one of the support cargo missions and will then later be launched into space by the special launch rack, the NanoRacks Cubesat Deployer, installed in the Japanese KIBO module on ISS.

Wikipedia has a very fine entry on Cubesats here

BRITE is an example of the use of nanosats for astronomy.