ALMaSS can integrate many factors simultaneously because of the mechanistic nature of the model construction. These factors work at the individual level, but are typically expressed as population level effects.

There are many examples of population-level environmental risk assessment using ALMaSS. Most create alternative scenarios and measure impact, but Topping & Luttik (2017) shows how this can also be used to set population-level protections goals and link these to laboratory tests.

The example below shows the use of the field vole model and responses at the population level to spraying an anti-androgenic stressor in the purple areas (orchards) in the landscapes below.

Although it is traditional to look at toxicological aspects when carrying out a risk assessment, this example evaluates two factors not usually considered, namely the habitat composition and arrangement in the landscape treated. Here we consider the area and placement of optimum habitat as unmanaged grassland (unNG), which is coloured yellow in the maps below. Population responses are given as population size relative to a baseline where no pesticide is applied. Pesticide is applied between the two dotted lines. 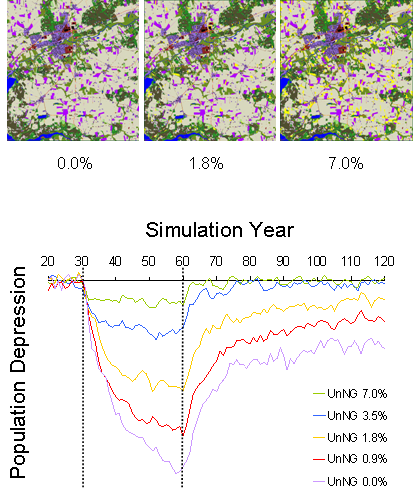 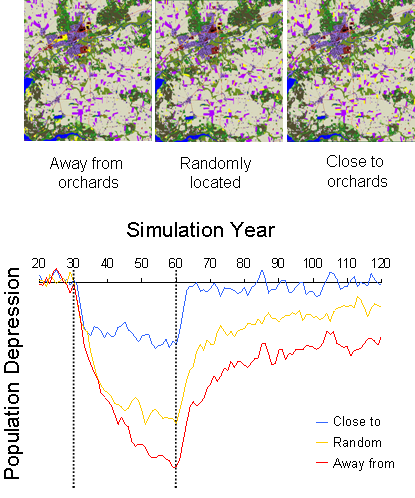 Both the amount of alternative habitat and its placement have an impact on the size of the population depression.  Other experiments suggested that these effects were as great or greater than increasing the toxicity of the chemical many times. These and many other factors must affect populations in the real world and therefore results of this kind must question the accuracy and perhaps safety of current methods of risk assessment.