Exploring hunting and conservation in ALMaSS

ALMaSS can be used like a virtual laboratory, modifying and testing things that would never be possible in the real world. Here we present two examples of how this can be used in hunting and conservation issues.

The assumptions behind modelling hunting and evaluation of its sustainability usually assume a global hunting model (i.e. all individuals have equal probability of being shot). However, in reality this is unlikely to be the case. The graphs below show population sizes and hunting yields of partridges under the global model (0) and a number of density thresholds corresponding to local densities at a 1x1 km scale below which hunting is prevented. 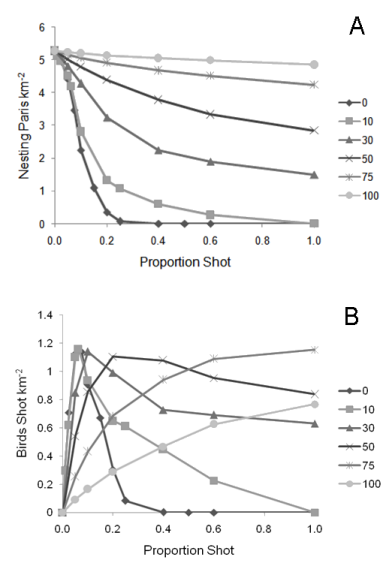 It is clear from the above that even a relatively low threshold for hunting has a significant stabilizing influence on the population. It is also interesting to see that in this case the optimal yield is the same no matter what the threshold is, just that at higher thresholds the local shooting pressure needs to be higher to obtain the same yield at the landscape scale. We can conclude from this that a real world shooting pressure that is close to the global model would be very dangerous for the population viability.

The second example comes from the hare model. In this case we wanted to evaluate different strategies for hare conservation. The key here was to provide suitable foraging areas during the summer months where due to maturing crops there is little space for the hare.

Our solution was to replace arable fields with extensively managed permanent pastures. The video below shows an the response of the hares over a period of a year to different habitat types. The bright green fields are those that are extensively managed grassland. There is a clear pattern of foraging in winter crops during winter and early spring, then as the crops mature in summer there is a shift towards activity in the grasslands, then back to crops after harvest and sowing. Download the video here .

The video above shows an artificially high density of hares for demonstration purposes, but similar results are obtained from realistic scenarios, and the effect is a dramatic increase in hare population size as a result of more and more successful litters. 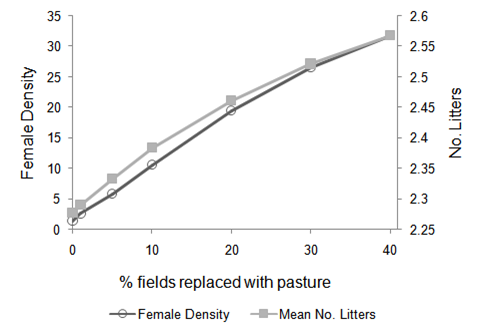