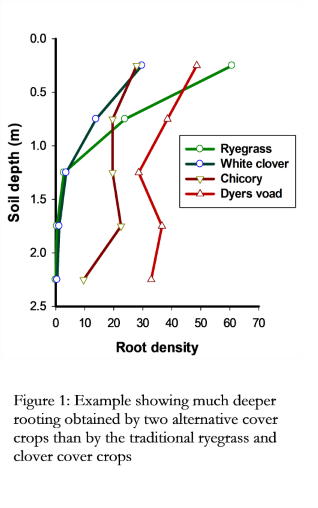 Positive impact on environment
The use of deep rooting crops can potentially improve environmental performance and resilience of food production and maintain or even improve agricultural soil quality due to more permanent soil cover and higher organic matter input to the soil. These effects can also contribute to climate change mitigation through increased carbon storage in the soil, including increased storage in deeper soil layers where stored carbon may be more stable.

Limitations of current crops and systems
Current agricultural systems do not utilize subsoils efficiently. The maximum rooting depths of common crops range from 0.5 to 2.5 m, which is much less than the potential rooting depth of many plant species.

One of the main limitations arise from the short life span of crop plants giving them too short a time to develop deep rooting and their maximum rooting depths are only maintained through short periods at the end of the crop growth period.

During most of the year, soil in arable cropping systems is either without crop and without roots or covered by young crop with a shallow rooting.