Agricultural productivity will become less reliable as climate becomes more variable. Crop rotations are influenced by climate change, but are also affected, by economic demand and ecological effects. PREAR is looking for the best rotational practices to maintain the balance between ecology and economics in the face of climate change.

We believed that current approaches to climate driven changes in cropping were too simplistic because they typically examined any effects in a single, focal crop. Our viewpoint was that farmers use crops within rotations and that climate change would therefore lead to the adoption of new or modified rotations.

Previous work had provided evidence that ecological networks, and the ecosystem services they support, were linked to farmland weed plants and that these were determined by rotations.

There were also predictions for how climate change might affect the efficacity of particular crops. What was missing was the mechanistic framework to tie theses effects together (i.e. making the link between climate change and ecosystem services via crop rotations) and the socio-economic understanding that would allow us to select for rotations that were farmer acceptable

The PREAR project is seeking to develop validated and practical rotational cropping systems that are acceptable to European farmers. Ultimately, the findings should assure stable agro-ecosystem service delivery that is resilient in the face of climate change.

The project builds upon existing data-sets and expertise to assess current and novel rotations; their impact on weeds and the resulting disservices (loss of yield) and cascading ecological benefits (weeds supporting predators of pests, pollinators and biodiversity indicators) across food webs.

The project uses these scenarios of crop rotations to assess and predict ecosystem function and resilience in current and potential crop rotations, and to conduct an ecological-economic analysis to optimize provisioning and regulating ecosystem services and biodiversity, and stakeholders (farmers) collaborate on the design of potential rotations. 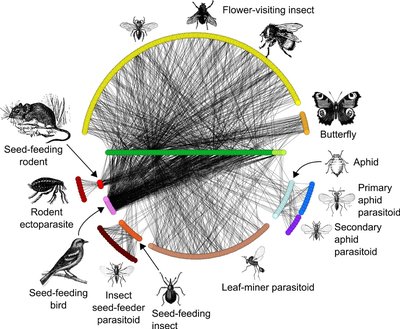 • Crop rotations do affect farmland plants (weeds), and the delivery of the ecosystem service of weed seed predation by carabid beetles.

• Preliminary analyses of a farmer questionnaire, conducted across France, shows that farmers are:

• Rotations, and their structure, are economically important. Socio-economic modelling approaches are showing that predictions of farmers’ crop choices are significantly improved by including crops as part of a rotation (these should not be considered in isolation). This is particularly evident when crop rotations models are played out in a landscape context. The long-term economic value (and risk) of farming changes with the spatio-temporal structuring of the rotations and is not just the sum of the individual crops in the landscape.