During the last decades, the olive farming industry is experiencing an intensification process that carried along some radical changes in its thousands-year-old agronomic practices. These are moving from low-input traditional plantation to intensified traditional plantation and highly mechanized system. This process led to the first environmental risk caused by intensification: excessive use of water resource. The current forecasts of climate change will likely worsen this picture, and in a way that is difficult to address quantitatively.

The aim of this project is to provide accurate tools to test the effectiveness of adaptation/mitigation management strategies to support long-term investment decision making on olive-tree cultivation across the Mediterranean under current and future climate. Advanced modelling approaches have been used to integrate available physiological knowledge into existing and well established modelling platforms, to assess climate change impact and evaluate mitigation/adaptation strategies by tuning agro-management factors.

The analysis is based on a consistent set of data layers, including weather, soils, and current agro-management information and it is conducted against present and short to mid-term future scenarios of climate change. A participatory approach with stakeholders engagement has been exploited through a reiterative process to identify/validate sustainable and economic viable olive tree management practices.

Simulation of olive fundamental growth and development processes has been based on the OLIVECAN model, developed at the University of Cordoba and IAS-CSIC. OLIVECAN is a simulation model of development, growth and yield of olives in response to climate, soil and orchard characteristics. It is a detailed mechanistic model with a high explanatory power. The model incorporates an advanced submodel of water balance which simulates soil evaporation, surface runoff and roots water uptake from different soil compartments (localized irrigation). 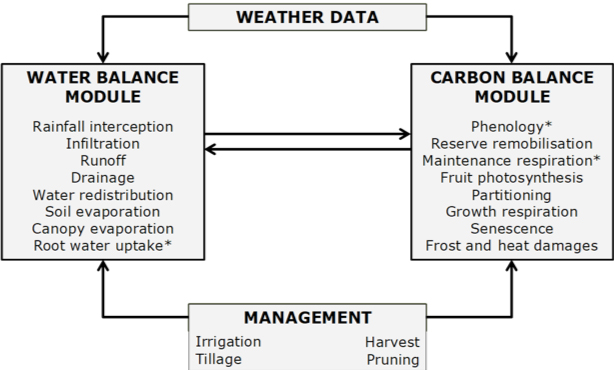 Results indicated that climate change will impact olive tree cultivation over the Mediterranean area by potentially reducing suitable areas for cultivation or their productivity in the southern while shifting the cultivation in western regions. This trend, mainly caused by a reduction of yearly rainfall, may be smoothed by appropriate management such as the reduction of evaporative demand through pruning system and the use of drip irrigation. In this regard, in most cases the productivity of irrigated olive orchards was forecasted to increase under climate change scenarios due to the higher water use efficiency induced by the increase in atmospheric CO2 concentration.

Models are developed to show the economic impact of ecosystem services from farming by soils, with examples from Spain, Germany, Poland and Norway. Guidelines for the treatment of contaminated soils were developed and published. The beneficial influence of soil amendments for reducing contaminant exposure and/or promoting crop yield and plant performance was revealed. Increasing yield of 20 % is possible. Several papers are published related to INTENSE.