Description of the English LTO

The English LTO used in EcoFINDERS is based on a series of mesotrophic grasslands under varying levels of management intensity in the Yorkshire Dales National Park, northern England. Traditionally, grasslands in the Yorkshire Dales were used for hay production and livestock grazing, using traditional methods of farming, which involved a single annual hay cut and inter-season grazing, with the application of some manure and lime. However, since the 1950’s there has been a shift to more intensive livestock and forage production with high rates of fertilizer application and multiple harvest of grass for silage, with associated sharp declines in plant species diversity. In recent years, there have been movements in the area to restore species-rich hay meadows by seeding (input from species rich meadows), controlled cutting and reduced fertilizer use. 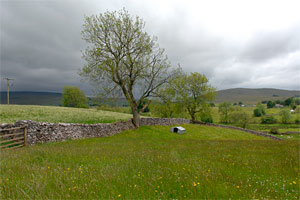 For EcoFINDERS, we have selected five sites across the Yorkshire Dales, each with a series of three fields, all on the same soil type, but under different levels of management intensity reflecting historical variation in farming practices in the region. At each site, we have selected: (a) a traditionally managed, unfertilized species-rich haymeadow, of high conservation value and often designated as a Site of Special Scientific Interest; (b) a semi-improved grassland, with intermediate level of fertilizer; and (c) an intensively managed, species poor grassland of low conservation, but high agricultural value. In total, we have 45 individual fields across the Yorkshire Dales, which are being sampled for a range of soil and vegetation characteristics. 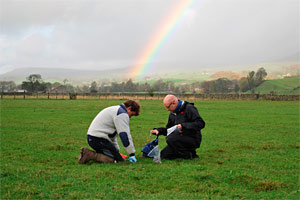 Our past work at these sites reveals a consistent pattern of declining plant species diversity, soil carbon concentration, and a decline in the abundance of soil fungi relative to bacteria, with intensive management. Traditionally managed meadows are more diverse, both aboveground and belowground, and have fungal dominated soil food webs, whereas intensively managed grasslands have soils that are less rich in fungi, both mycorrhizal and saprophytic, and have lower amounts of carbon, but more nitrogen. 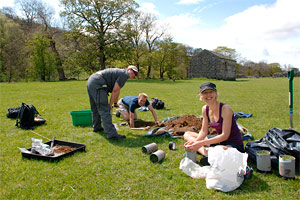 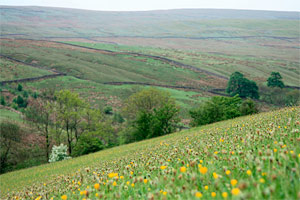 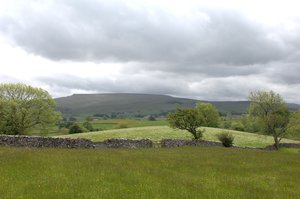 The landscape at Bowberhead, Ravenstonedale, UK

Pierre Plassart and Celine Farvre-Primot from INRA, Dijon, travelled to Lancaster in early June 2011 to visit Richard Bardgett to sample soils from the English LTO sites in the Yorkshire Dales National Park. Pierre, Celine and Richard joined Helen Quirk and Sue Ward, also from Lancaster, to sample soils from one of the five sites of the English LTO at Bowberhead, Ravenstonedale.  This is one of five sites which each include a gradient of management intensity from traditionally managed, species-rich meadows, to semi-improved meadows, and intensively managed grassland. At each site, we recorded vegetation composition and sampled soils from four sub-plots within each of the three levels of management intensity. Soils were shipped back to Lancaster and then to Dijon for molecular investigation. 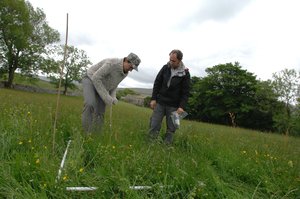 Inserting the soil sampler through the vegetation into the soil 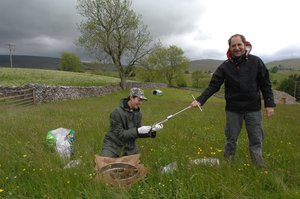 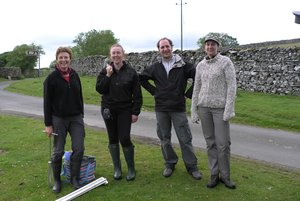