Leanne Peixoto will this summer graduate as a Ph.D. from Department of Agroecology, Aarhus University, where she worked on the Deep Frontier project, focusing on carbon storage in deep soil layers. Some of her findings during the project were quite surprising, and they emphasize the need to better understand interactions and activities in deep soil layers, if the potential of soil carbon storage in agriculture is to be wholly unfolded.

Deep-rooted crops hold the potential to store atmospheric carbon (CO2) in the soil, thereby contributing to soil fertility and climate change mitigation. So far, however, the strength of these potentials is poorly known and needs to be explored in order to develop a strategy that allows efficient carbon sequestration in deep soil ecosystems.

“It has previously been questioned whether deep rooted crops can bring down substantial amounts of carbon into the soil. If you read the literature, studies of agricultural systems have mainly been done for the topsoil, sometimes only the upper 25 cm of the soil. What we wanted to investigate was: How much carbon is being deposited from the roots into deep soil layers,” Leanne explains.

The first part of the work was done in the root tower facilities, in ten 4-meter tall and aboveground containers filled with soil. The aboveground access makes it easy to take samples in different depths and different layers of the soil. Leanne worked with three different perennial plant species: Lucerne, Kernza and Rosinweed, which are all deep-rooted plant species. The plants were labeled with carbon isotopes, and the measuring of how much carbon was coming down with the roots took place to a soil depth of 3.6 m.

“The amount of carbon going belowground obviously decreased with depth,” Leanne explains. “This was expected, because you have less plant roots with depth, so less carbon is being deposited. But the crop Lucerne specifically was interesting, because we found that it deposited more carbon than the other species at the deepest layer.”

So carbon was going belowground, the team detected – finding out what happened to it was the next step:

“It is one thing to get the carbon down there, but we also want it to stay there. This is a big issue, when discussing carbon storage, where deposited carbon is potentially released back into the atmosphere,” Leanne says.

This made Leanne and the team focus more on microbes - the fungi and bacteria in the soil.

Special attention was given to the dead microbes: Recently more work has been done regarding the dead microbes, because it has been found that the stable biomolecules in dead microbes in the soil are important for carbon storage. One major finding is that with increasing depth, there is an increasing potential for microbial stabilization. This means, that even if the amount of carbon stored decreases with depth, that carbon enters a more stabilized carbon pool in relation to its association with the microbial activities in deep soil.

Leanne explains: “This is a big finding, because people will say, ‘nah, it is such a small amount of carbon that goes to those depths, what does it matter?’  But here we showed it actually does matter, and the carbon persists in the soil, at least based on what we found. However, we cannot predict if this is also the case based over a longer time span - we can only say what we saw based on our measurements in the root towers.”

There are a lot of different factors influencing whether the carbon stays in the soil or not, since soil is a complex and living thing, which is something we do not normally think about, as Leanne puts it.

Regarding carbon storage, there are other stabilization mechanisms that influence the storage capability, but the dead microbes play a huge role in stabilization of carbon, and Leanne and her team recently published a scientific paper on this issue.

Moving to the field!

The root towers built in the Deep Frontier project are great for understanding certain processes, but it is not entirely representative of conditions in the field:

Leanne explains:  We wanted to move our research to the field in order to make this a more realistic experiment and study carbon there as well. We then did a field experiment using the crops Kernza and Lucerne, which are very interesting to compare. Lucerne fixes nitrogen from the atmosphere, so you do not have to fertilize it. Besides Lucerne being a legume and Kernza a grass, they also have different root structures.”

The team tried out three different treatments: Lucerne was not fertilized – for above-mentioned reasons – and the Kernza was given two different levels of nitrogen fertilizer, 100 kg N and 200 kg N per hectare.

The idea was to investigate if increasing the nitrogen fertilization of a crop can increase the amount of carbon stored belowground.

The team used carbon-based isotopes to see if there were any differences across these three treatments and took samples down to 1½ meter soil depth.

“The experiment showed that increasing the amount of fertilizer clearly increase the aboveground plant biomass, but when you look belowground, we did not see any differences. So it shows that if you add more fertilizer, it increases yield, but it actually makes no change to the amount of carbon being deposited by the roots into the soil. Rather Lucerne displayed a greater potential for carbon stabilization by microbes than Kernza. That is an important finding. This means that Lucerne-mediated transport of carbon to deeper soil layers could have a beneficial effect on carbon storage and stability and represents a promising mitigation option. ”

To Leanne, the important message to get across is also that there is more to the soil than just carbon going belowground. “We have to also understand that the bacteria and fungi living there are very important. The soil is full of these living things that you cannot see, and a lot of activities are going on, even in deep soil. It is active, it is a living thing, and understanding the interaction holds the key to more efficient carbon storage.” 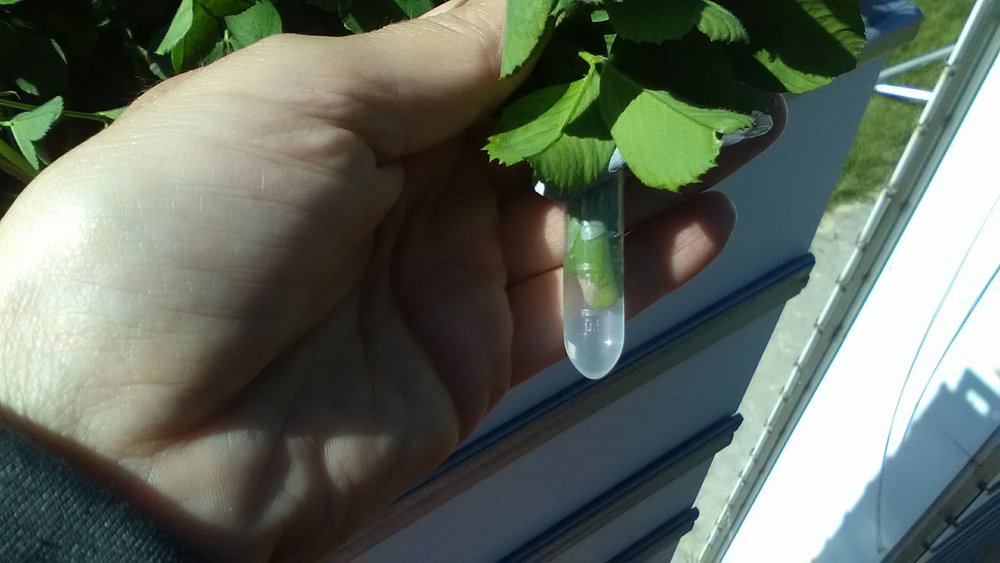