In Estonia, organic production has recently developed rapidly and the share of organic land in the total agricultural area is approximately 23%. However, organic milk production has not increased, and many current farmers were also the pioneers from the start. Reasons for the relatively low proportion of organic dairy herds have been investigated within the GrazyDaiSy project

In 2019, 57% of all organic producers (2060 farms) in Estonia kept animals, mostly beef cattle and sheep. Only 106 organic farms had dairy cattle and the total number of adult dairy cows was 1872 (2,2% of country’s total dairy cow population). Most of the farms were small, 80 farms had less than 20 cows. The number of organic cows has been declining for the last 10 years and the ban of tethering stables in the beginning of 2014 is considered as one of the main reasons, in addition to lack of organic feed and poor marketing possibilities of organic milk.  Only one dairy company buys and processes organic milk. It is located on an island and receive milk from only 4-5 organic farms.  Another 4-5 farms have their own certified on-farm dairy processing plants. 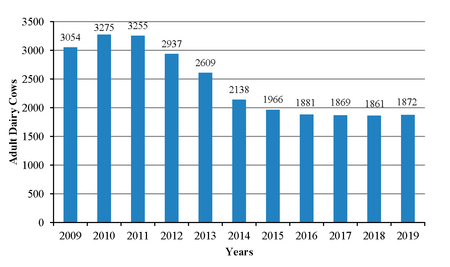 There are no recent studies about the situation and potential limitations of organic milk production in Estonia, and therefore, the aims of this study within the CORE Organic Cofund project GrazyDaiSy were to collect data, which could help identifying farm related reasons and lock-ins for the relatively low proportion of organic dairy herds, in relation to feed, milk quality, and diseases. This was investigated in 18 dairy farms (herd size 20-170 cows).

The milk yield was in average 40% lower than for conventional herds, partly explained by the breed choice. The share of Estonian Red and Estonian Native breed was higher in organic farms. They were known as having a lower production. The milk yield was slightly higher during summer than during winter, which may reflect that farmers had difficulties in being feed self-sufficient, and organic protein feed was expensive or lacking. All this made it less attractive to produce organic milk.

Herds average somatic cell count (SCC) in bulk milk was constantly high in all three project years (over 500 thousand cells/ml), confirming that this was indeed one of the biggest challenges regarding animal health and milk quality.  However, it must be stated that there were four smaller farms out of 18, with extremely high SCC and affected therefore the overall result. Generally, the SCC was lower during the grazing period.

Despite Covid-19 interviews in selected farms were possible and performed

The big variation between farms offers a possibility to look at risk factors across the farms, and learn from the spectrum, including experiences and information about practices, which could explain the differences. Farmer groups could maybe foster learning between farms for common improvement. However, none of these methods could be performed in the last phase of the project, due to Covid-19. Interviews in selected farms were possible, and performed. The most common type of mastitis was related to the environment (mainly Str. uberis), and antibiotics (including selective dry cow therapy and teat sealant) were still the most used methods to combat the problem, although clinical signs also were treated with Salicam or ichthyol-camphor ointment, sometimes with honey. Neither homeopathic remedies nor anthelmintics were used in interviewed organic dairy farms. Fertility problems were identified as the main reason (22% of all cases) for culling organic cows, followed by mastitis (16%) and leg problems (13%).

As a part of the GrazyDaiSy project, grassland parasite indicators were also measured in two case farms. After the first grazing period, a very low level of nematodes was found.

Although it was not possible to visit the farms for a long period, interviews were done. The participating farmers had sampled milk for analysis for pathogens, and farm specific action plans were made together with their local veterinarian. Furthermore, as a very new service in Estonia, a differential somatic cell count analysis, was offered to farmers in Estonia, which potentially could enable a more effective mastitis management. Identification of udder health problems in the herd and preparation of control schemes is farm-specific, where collaboration with a veterinarian is very important. In this process, it was found that a well-functioning milking system, high hygiene standards, and precise milking routines as well as a generally clean and welfare-friendly environment (e.g. allowing safe walking) were of high importance for maintaining good udder health. Studies on grazing and home-production of feed may further reveal good practices and potentials for improving the resilience of the organic dairy herds during the year. Before the project ends, the results of these case studies will be further discussed across the countries in GrazyDaiSy, which had a focus on reducing the need for medicine use through animal health and welfare improvement.