What are farmers’ perceptions and experiences of dam-rearing in organic dairy herds?

Interviews with farmers and other actors, carried out in the CORE Organic Cofund project GrazyDaiSy, bring forward perspectives related to calves, cows, humans and systems, of relevance for future development of dam-rearing systems.

Dairy cows are strongly motivated to take care and nurse their calves after birth, and calves have a natural need for milk and suckling. For many decades, cow milk has generally been prioritised for human consumption. However, some dairy farmers keep calves with their mothers for a period of weeks to months after calving, and dam-rearing has become a steadily growing battle field of debate during the last years in Europe.

Farmers and actors bring up perspectives on calf, cow, humans and systems

Interviews, case studies and on-farm studies across The Netherlands, France, Norway and Denmark showed that dam-rearing is practiced in a wealth of different systems. Four main perspectives should be considered when organizing a dam-rearing system to fit the context and work well: calf, cow, farmers and farming system.

Nutrition, care and learning are important qualities in dam-rearing systems

Dam-rearing systems can be seen as contributing significantly to the physiology and natural behavior of calves as well as of mother cows. Three important qualities in dam-rearing systems were described from animals’ perspective: 1) nutrition, 2) care, and 3) learning. The priorities and perceptions of the importance of these three qualities influenced very much the farmers’ choices and priorities of systems. A focus on nutrition could for example motivate the choice of systems with part time and strongly restricted contact between cow and calf, e.g. two times two hours daily access. Others focused on care and learning, and perceived the calves to be equipped with capacities and skills through learning from the dam and others in the system, adding to their life opportunities. They would favour a system where mother cow and calf were together with as little restriction as possible, although such systems may require more efforts to organize and keep the overview in. 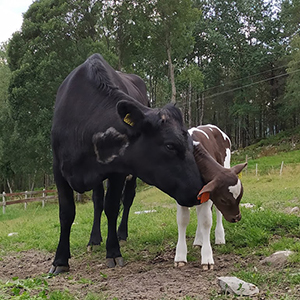 Among some interviewed actors, the needs of the calf seemed to be more in focus and of higher priority than the natural needs and the motivation of the mother cow. This was clear when talking about foster cow systems (where the mother cow is separated early after calving from her calf), but also when talking about dam-rearing systems, many seemed to focus most on the benefits of the calf, although many noticed that the mother cow often reacted strongly to the separation and showed much distress.

Farmers, who were introduced to dam-rearing systems, but without having prior experience of these systems, pointed to the need for developing systems, which were much more ‘friendly’ to both cows and calves than what they saw. That is, develop dairy systems, which allowed cows and calves to be together, and the calves to learn about life in a dairy herd (e.g. indoor and outdoor life, and eating solid feed and grass), and with minimum risk. Furthermore, the needs of bull calves, which were sold out of the system in an early age, and their mothers, were often ignored.

There was a repeated questioning of ‘naturalness’ in relation to dam-rearing. ‘Unnatural elements’ were brought up by interviewees, such as the very high milk yields of dairy cows, the deep udders or the busy life in dairy herds, which might not give a newborn calf sufficient peace to rest. Also, again how to organise systems where the access between cow and calf gives as little restrictions as possible and ‘mimic’ natural behaviour, was in question.

Calves with their dams in dairy cow systems