How can the use of pesticides in intensively managed organic orchards be further reduced? One approach is to use cover systems that protect the trees against rain and pests. This was tested within the DOMINO project, and interim conclusions are presented in a video.

As part of the CORE Organic project Domino, a rain cover combined with a lateral insect protection net was tested in an organically managed apple orchard at FiBL in Frick (Switzerland). The rain cover should reduce the incidence of fungal diseases on the trees as well as postharvest diseases on the fruits in storage. Pests are kept away from the trees and fruits by the lateral netting. The cover system was compared with the following two treatments without coverage: 1) standard organic plant protection 2) control without plant protection. The trial was conducted on the apple varieties ‘Topaz’ and ‘Ariwa’ in 2019 and 2020 and will be continued in 2021.

At full bloom, the cover system is closed and no plant protection treatments is applied. The cover provides a good protection against fungal diseases such as scab, lenticel rot, and sooty blotch. However, the microclimate under the netting promotes powdery mildew. Storage diseases such as lenticel rot, monilia and grey rot can also be reduced with the help of the cover. Insect damage on fruits is strongly reduced, but the presence of woolly apple aphids under the net can become a problem. Aphid infestation under the cover can be avoided by applying a pesticide treatment with a neem extract before closing the net, if needed. No significant differences were found in fruit size, firmness and sugar content. The percentage of overcolor of the fruits tended to be smaller under the cover.

Irrigation is required under the cover to prevent the trees from drought stress. Care must be taken with microsprinklers in this regard, as they can cause a moist microclimate in the lower half of the tree and promote infections. Since plant protection treatments no longer need to be carried out from the full bloom stage on, working time can be saved. On the other hand, the amount of work required to close and open the cover is high. In addition, the cover must be opened and closed again briefly during the season for work such as fruit thinning or summer pruning. A slender training system is advantageous for a single row cover. Large-volume and vigorous-growing trees are rather unsuitable, as it should be avoided that the leaves are too close to the net, which can cause it to get wet. The extent to which the netting affects tree physiology, i.e. whether the netting has a thinning effect due to shading and whether growth and leaf characteristics change, needs further research.

Watch the video presenting the first results of the trial 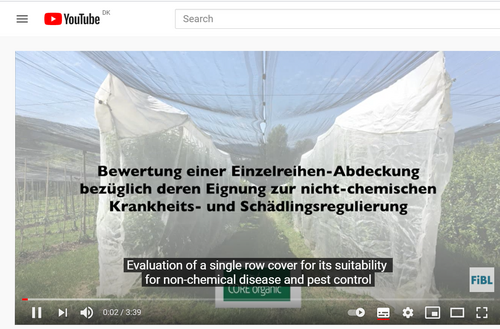