How to increase belowground biodiversity by strip cropping systems

Strip or intercropping systems, where two instead of one crop are grown at a time, can increase the functional biodiversity of the soil. A Practice Abstract has been released on this topic as an outcome of the SureVeg project

The SureVeg results show that strip cropping affected the number of species of bacteria and fungi in the soil and the microbial respiration. Also, the pools of nitrogen, phosphorous and carbon held in the microbial biomass were affected. Strip cropping increased the infection level of the crops by the fungal symbiont of mycorrhiza, when compared to crops grown in mono cropping systems. However, the effect of the strip cropping system differed depending on the location and the crop species in the six SureVeg field trials. The strip cropped species were tomato and faba bean in Italy, celeriac and leek in Belgium, leek and grass-clover in the Netherlands, white cabbage and beetroot in Denmark, cabbage and onion in Finland and cabbage and faba bean in Latvia. Follow this link to read the Practice Abstract at the SureVeg website.

The cross European investigations on soil functional biodiversity are led by researcher Alessandra Trinchera from the Italian research institution CREA. The investigations build on a strong collaboration between partners in SureVeg. We are engaged in how to support the functional biodiversity as part of a balanced organic production system of high-value food. The functional biodiversity of the soil is important to sustain a resilient agro-ecosystem, which can continue to deliver high quality food, and at the same time withstand pressures. Pressures are for example frequent tillage operations, which may lead to soil degradation and environmental emissions. High biodiversity sustains the biological functions and the fertility of soils in the longer term, which is important in high-value production systems.

SureVeg Practice Abstracts and Workshop in Rennes coming up

The SureVeg project is ongoing and additional Practice Abstracts and scientific articles are in the making. They deal with additional topics that we see as crucial elements to progress more balanced production systems of high-value food. The topics include insect biodiversity, vegetable production, fertilizer strategies and nutrient use efficiency, as well as the choice of crop species and the design of a robot for field operations in strip cropping systems. Several of these topics are planned for presentation at the World Organic Congress in Rennes, France, and a SureVeg Workshop for stakeholders will be held with the title Diversified strip- and inter-cropping systems: what can we gain in modern organic farming? See you then!

The SureVeg project is funded by the CORE organic COFUND programme and national funding bodies of Italy, Belgium, the Netherlands, Finland, Latvia and Denmark. 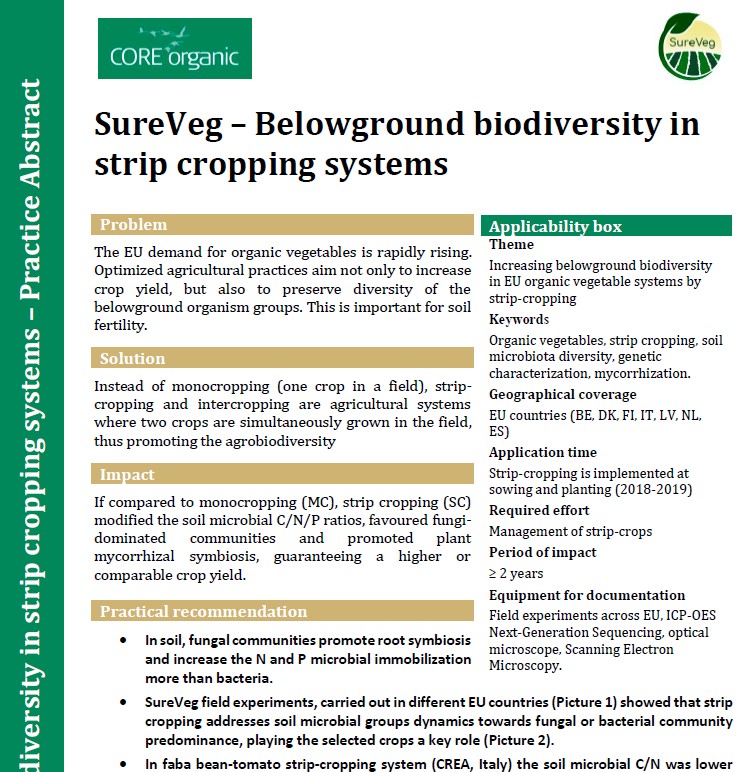