One of the aims of the CORE Organic project GrazyDaiSy is to practice and study social learning and is therefore collaborating with other projects working with cow-calf contact systems. The Danish GrazyDaiSy partners analyse the processes of ‘Stable Schools’, including how they contribute to identify solutions to challenges in cow-calf systems.

This approach can contribute the formulation of relevant research questions and give knowledge about important practice-perspectives of these systems, as well as being helpful in shaping material for advisory services.

What is the challenge?

Separating cows and calves shortly after calving has been common practice in organic dairy herds, even when it is an obvious dilemma in relation to the organic principles. Participants in the CORE Organic Cofund project GrazyDaiSy, which include the partners AU, Organic Denmark and Them Dairy Company, participate in so-called Stable Schools on developing cow-calf systems. Many dairy farmers as well as actors in society are increasingly interested in finding ways to make cow calf contact systems work in practice, and Stable Schools are particularly suitable to develop a spectrum of context relevant solutions to experienced problems and challenges of common interest for a group of farmers.

What is ’Stable Schools’? 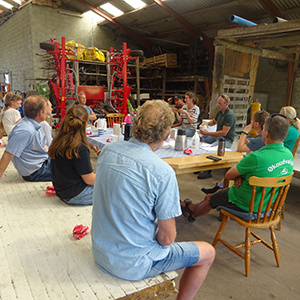 Stable Schools are groups of farmers who meets regularly on the group members’ farms with the aim to help each other to reach a common goal – such as in this case to make cow-calf contact systems work in dairy herds. The ‘host farmer’ for each meeting has made an agenda in collaboration with the facilitator. This agenda includes one ‘success story’ and two ‘problem focus areas’, to which they want to have their colleagues’ suggestions to. The participants can make use of each other, and base their advice on their experience and broad general understanding of how the farming systems are organized, including each farmer’s particular goals.

Stable Schools as a part of the project

The first Stable School started in April 2019 with participants from five farms plus a couple of farmers who for different reasons left the group along the way. The group met altogether nine times on each other’s farms, until the activity was closed down due to Covid19. The group members discussed topics like milk-lay-down, ‘suckler aunts’, organization of housing systems, calf supplementary feeding and not least different weaning methods and –timings have been on the agenda. The farmers have shared successes and failures with each other. The experience, which each participant built up at home contributed to learnings for everybody. The distance between farms was challenging. However, travel time in shared cars was sometimes possible and gave opportunities for good discussions on the way. In June, it became possible to meet again, outdoor and with distance and other measures, and new members joined so the group became bigger and even more diverse. Most participating herds were at a size around 100 cows, but the range is wide from about 50-400 cows. Despite the wide range, farmers seem to learn a lot across farms and farmers.

The research focus on change and transition

Obviously, the Stable Schools gives a constant ‘platform’ to ask for help among colleagues in similar, yet different, systems. Seen from a research point of view, GrazyDaiSy has an aim of describing ’change and transition’ to new routines, and cow-calf contact systems is an example of a real ‘boiling pot’ in that regard. No farmer in Denmark is ‘born into’ a cow-calf contact system, but has to develop it in existing systems, which were not organized to e.g. different age groups indoor as well as outdoor. By combining practice development with analyses based on theories on change processes and wider transitions in agricultural approaches in an action research approach, the project participants have captured knowledge on practical problems and challenges, and become better equipped to develop questions, projects and answers, which are relevant in and for practice. This can be important for the development of future farming.

GrazyDaiSy (H2020 Eranet CORE Organic Cofund projekt 727495) is supported from transnational financing bodies, with cofinancing from EU, and funds from the Innovationsfund for the Danish part).

The Stable Schools are part of a Danish sister project, the OrganicRDD4 project KALVvedKO (Cow’n’Calf; 34009-18-1387) which is coordinated by ICROFS and funded by Grønt Udviklings- og Demonstrationsprogram (GUDP) under the Ministry of Food and Environment. The dairy companies Thise and Naturmælk participate in this project.

All photos are taken by Mette Vaarst, and should only be used for this article; otherwise ask for specific permission in each case where they could be used.