Updates from the first half of the GREENRESILIENT project

During the last decade, there has been a strong discussion about the principles of organic farming, driven primarily by the differences in organic production systems in Europe. Some systems are highly intensified and focus on high economic sustainability whereas others focus on increasing biodiversity and implementing agroecological principles. The main objective of the CORE Organic Cofund project GREENRESILIENT, which started in April 2018, is to demonstrate that an agroecological approach to greenhouse production is feasible and can enable robust agroecosystems in different European areas. 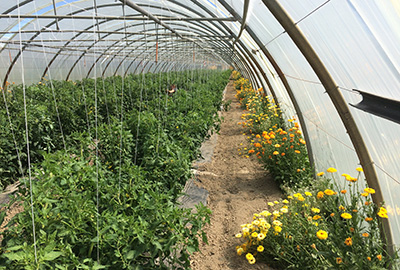 The project hypothesis is that the implementation of more resilient production systems, based on low energy consumption, appropriate crop rotation, use of agroecological service crops (ASCs) and local organic amendments, is possible at almost any latitude in Europe. Eighteen months after the start of the project, the main research activities carried out so far seem to confirm the hypothesis but further studies are needed.

During the first three months, detailed BAU and INN designs for the five experimental sites were defined:

In France, six systems are compared, but the focus is on one BAU system with tomato and a WLC grown according to common practices in France and one INN system with mixed crops in alternating rows, flower strips and transfer mulch.

In Denmark, the BAU system is a mono crop of tomato heated according to crop need. The INN system is kept frost-free with three to four crops per annual cycle, including WLCs, tomato and flower strips. 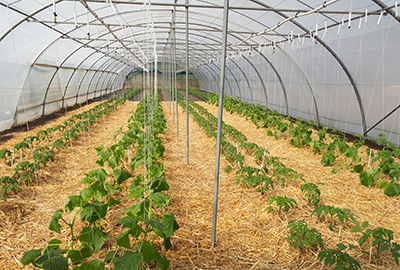 Differences in soil health and functional biodiversity are evaluated in the BAU and INN cropping systems, within each experimental site, by studying bacterial, fungal and nematode community composition in soil samples as well as insect and weed communities.

Growers, policy makers and the general public had a chance to learn more about these developments and see the experimental sites at Open House events, which will be repeated during the upcoming growing season. Consumers also had the chance to get involved in the project and learn about diversified production systems at targeted events in Switzerland, Denmark and Italy. To learn more about previous and upcoming events as well as project results and updates, visit the Greenresilient website or follow the project on Twitter and Facebook.