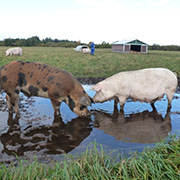 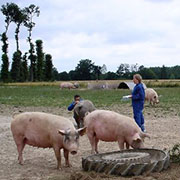 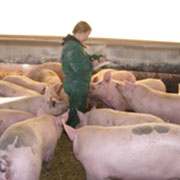 ProPIG consists of 9 partners in 8 countries (AT, CH, CZ, DE, DK, FR, IT, UK) with the aim to assess and improve animal welfare and environmental impact of organic pig farming:

As a result two practical tools for further use by farmers and advisors were created:

Generally based on the parameters assessed, it was shown, that a high level of animal health and welfare was found in most farms, with a few parameters which should be improved across all systems (e.g. vulva deformation from previous injury in sows). When comparing the three husbandry systems, OUT weaners and fatteners had better health regarding respiratory problems and diarrhoea and OUT sows less MMA and lameness, with POUT having some advantages as well over IN (e.g. lameness of sows). Regarding productivity, losses of piglets did not differ across systems; mortality of IN fattening pigs was lower than in POUT and their feed conversion rate was better.

Life Cycle Assessment (LCA) of global warming potential (GWP) was influenced mainly by feeding of fattening pigs and variation within a husbandry system was higher than between systems, indicating that good values can be achieved in all systems.

Three clusters were identified on the basis of environmental impact, a ‘high, ‘medium’ and ‘lower’ with similar numbers of each husbandry system in all three of them.

The three systems did not differ regarding N balances. After clustering, N import from feed purchase was identified as main influencing factor. IN were significantly lower than POUT/OUT regarding P balances.
No significant relationship between health, welfare and environmental impacts was found when comparing the LCA clusters with an ‘animal health and welfare score’ (‘%GOOD’), individual animal based parameters or correlations between AP/EP/GWP and the ‘%GOOD.

Farm specific strategies were evaluated by farmers’ opinion and assessing within-farm improvement in measured criteria over 12 months. The median number of aims per farm was 2 (1 to 4), with fertility, nutrition, health and lesions most commonly addressed. In total 74.8 % of measures were partly/completely implemented and 81.6 % of goals were partly/completely achieved.

Go to publications from ProPIG

Organic pig breeding and pig fattening farmers, organic and conventional advisors and veterinarians in all participating countries. All participating institutions will expand their networks across disciplines, being involved in animal welfare, nutrition and environmental impact. Also the transdiciplinary approach connects advisory structures and researchers.

The knowledge gained and the tools developed will benefit similarly farmers, advisors and veterinarians in other countries.

The outcomes can benefit (national) stakeholders such as organic associations, agricultural chambers and ministries across Europe. Also the scientific community is targeted by aiming to publish the results in scientific journals.