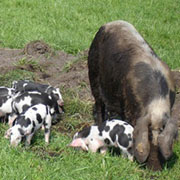 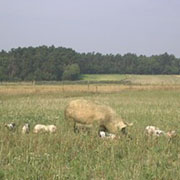 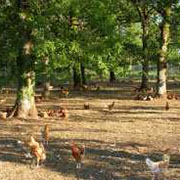 This project aims at supporting the transition to base the feeding of organically produced poultry and pigs on feed of 100% organic origin. Through co-operation between 11 partners, a range of digestibility trials and feeding experiments is carried out with pigs (sows, piglets and finishers) and poultry (layers and broilers), clustered around concentrate feedstuffs, roughage, and foraging. These activities were supported by an estimation of the availability of relevant feeds across Europe and suggestions on how economic viable strategies could be implemented.

The estimated self-sufficiency in the countries included in the project which represented the major part of the organic livestock production in Europa was around 68% for dry matter, around 56 % for protein and 50% for lysine.

Dehulled sainfoin seeds, heat treated grass pea seeds and mussel meal are relevant substitutes for soybean products in feeding of piglets, which otherwise often are most difficult to feed on local feed resources. Though, the inclusion rate of each of these feed stuffs needs to be limited due to other effects on the young animals. Likewise, protein from organically produced Spirulina algae can fully replace protein from traditional organic sources in broiler diets, and insects meal (Hermetia illucens) up to 12 % in the diet can replace soybean cake without any difference in egg production, feed conversion, health and taste of eggs.

In general an important way to obtain protein sources with an appropriate amino acid profile for poultry seems - by technological means - to refine ingredients of plant origin enriching the relative content of Methionine, e.g. for sunflower seed expeller, and until now mainly ignored source for protein and essential amino acids for pigs and poultry is grass clover and luzerne, either as grazed in the range or given as silage. Based on digestibility trials and practical feeding experiments we conclude that these sources can cover a significant part of the protein and amino acids supply and thus help to alleviate the lack of these nutrients of organic origin in Europe.

In growing pigs inclusion of significant amounts of grass clover and luzerne will impair the overall feed conversion ratio, since the utilization of the forage for net energy is very low but as mentioned the roughage still supply significant amounts of amino acids. In addition inclusion of roughage in the diet prevents ulcer damage. For adult pigs the overall utilization of the forage is expected to be better.
In relation to feeding of poultry it is interesting to notice that the methionine content in the protein of early harvested luzerne is higher than that of soya bean cake and almost twice as high as that of peas. It was shown that early cut silage may be included in a proportion of 20% in the diets for layers and slow growing broilers without impairing production.

Also the access to a foraging area represent a possibility for the poultry to partly cover their nutritionals needs by the below ground biomass available here. Of all the invertebrates studied, earthworms present the most potential in contributing to the nutritional needs of poultry. One m2 of most habitats studied would contribute considerably to the daily requirements of laying hens for methionine, and in most cases, completely meet lysine requirements also.

These production results together with a comprehensive published database of detailed information on organic feed stuffs is expected to support producers in achieving a 100 % organic feed supply, while obtaining acceptable production and health results.

Go to publications from ICOPP

The main target groups, both within partner countries and across Europe are organic farmers, their advisors, the organic supply chain (feeds on the one hand and pork and poultry producers on the other), organic certification bodies and policy makers.