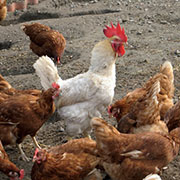 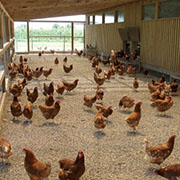 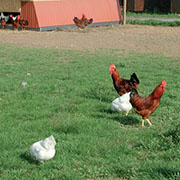 This project focused on the main challenges for organic laying hen farms regarding disease and
animal welfare management. Data collection protocols for the four main topics, (1) parasite
burden, (2) use of the outdoor run, (3) feather- and injurious pecking and (4) health problems
like keel bone deformation and health of the birds' feet, were developed.

After an assessor training and validation of assessor agreement, data collection was carried out
on 114 organic layer farms in the eight participating countries. They were visited at a hen age of
around 35 weeks (“peak of lay visit”) and a second time towards the end of lay, at about 60 to
65 weeks of age (110 flocks). Data collection comprised housing and management of the flocks
and examination of 50 hens per flock for plumage condition, injuries, foot pad lesions, keel bone
deviations and other health parameters. Additionally, 15 dropping samples were collected per
farm visit and the number of helminth eggs and coccidian oocysts per gram faeces (EPG)
determined. From 56 of the flocks, gastrointestinal tracts of 15 hens were examined for
endoparasites after slaughter or killing.

Based on sections, infection with Ascaridia galli was prevalent in all countries and almost all
flocks. The prevalence of infected hens ranged from 0 to 100 % with a mean of 68 %. For
Heterakis worms, the mean prevalence was 32 %, also with a range from 0 to 100 %. The
prevalence of hens with tapeworms was found to be between 0 % and 73 % with a mean of
13 %. The average number of A. galli found in the hens showed large variation between flocks;
ranging from 0 to 56 roundworms per hen with a mean of 10 worms. As regards Heterakis
infections the average number per flock varied from 0 to 121 worms per hen with a mean of 17
worms. Access to outdoor areas had a significant effect on the number of roundworms. The
more hours per day the hens had access to outdoors, the lower the mean worm burden. Coarse
fodder allocation did not affect the prevalence of intestinal worms.

In droppings (Ascaridia galli) and Heterakis worms combined had a prevalence of 55 % at peak
of lay and 61 % when visited at the age of 60-65 weeks in the eight countries. The egg counts
were probably mainly based on Ascaridia eggs, as intestinal droppings were used for analysis
and Heterakis eggs are found in ceacal droppings to a larger extent.

Cardboard mite traps were used to examine blood mite levels. The number of blood mites –
from at least 5 traps randomly distributed at the farm – varied between 0 and more than 10,000
irrespective of the traps being used in summer or winter.
Plumage and keel bone evaluations were accomplished in 50 hens per flock at the age of 60-65
weeks. Keel bone deviations or callus material on the keel bone were present in at least one
hen in every flock. Callus material as a result of former fractures was palpable in 0 to 88 % of
hens per flock (mean 28 %) and deviations in 0 to 84 % of hens per flock (mean 31 %). Zero to
100 % of the sampled hens had moderate or severe plumage damage and 0 to 96 % had
wounds. The risks of feather damage and pecking wounds were reduced in flocks with long
access times to the outdoor range.

The maximum percentage of hens observed in the range at one observation was 77 %.
Ranging behaviour was influenced by environmental factors such as temperature and
precipitation as well flock size and available range area per hen. A higher proportion of hens
was observed in the range in smaller flocks and with more range area per hen. Furthermore, a
higher proportion of hens was observed in ranges with cover (e.g. hedges and artificial shelters).
Recommendations to reduce parasite burden, feather and injurious pecking, keel bone
deviations and foot pad lesions and to maximise range use were compiled in a recommendation
leaflet which is available on the CORE Organic website.

Go to publications from HealthyHens

The main target groups are organic egg producers and advisors as well as political decision makers in Europe and other countries with comparable production systems.