On the search for grasslands: long distance dispersal of spring‑staging Barnacle Geese (Branta leucopsis) from a farmland area in Southeast Denmark

In early March 2019, twenty barnacle geese wintering in an intensively farmed area in Southeast Denmark were GPS-tagged. Tagged geese selected large open (especially permanent) grasslands above relative availability and close to their roosts, although winter cereals were also used. Surprisingly, during March and April almost all tagged birds left the area and moved to coastal grasslands in other parts of Denmark, the German Wadden Sea or southern Sweden, some up to 210 km diametrically opposite to the main migratory direction towards the Russian Arctic later in spring. The unexpected long distance dispersal may be caused by lack of suitable short-grazed coastal grasslands in the study area and it shows that barnacle geese are highly flexible in their site use.

The population of barnacle geese wintering in Denmark has shown a steep increase during the last decades to now c. 250,000 geese, prompting a parallel escalation of agricultural conflicts. Barnacle goose is listed in Annex 1 of the Birds Directive and is protected from legal hunting. However, landowners can obtain a permit to undertake so-called derogation shooting (lethal scaring) to reduce local damage to agricultural crops where other means of scaring have been insufficient. Totally close to 20,000 barnacle geese are killed annually by derogation shooting in Denmark now. In this paper, we show that the number of barnacle geese during winter and the derogation efforts of barnacle geese have increased in Denmark in the period 2010/11 – 2018/19 with large variation between different areas of the country. A statistical analysis demonstrates that differences in the number of issued derogations permits across the country are primarily explained by differences in barnacle goose abundance, and secondarily, by prevalence of vulnerable crops and differences in crop productivity. Hence, derogation efforts are highest in areas with many geese, high proportions of crops vulnerable to goose grazing and high crop yields.

Geese and swans have increasingly adapted to forage on agricultural land, and winter wheat is the most commonly reported crop damaged in northern Europe. This study, carried out in Southeast Denmark in collaboration between Aarhus University and SEGES innovation, apply two parallel approaches (exclosure experiments in undisturbed fields and yield assessments in fields subject to scaring) to quantify the impact of waterfowl grazing on winter wheat yield, crop height and nutrient content. The involved species were mainly barnacle geese, but other species of geese and whooper swans were also present in smaller numbers. Results showed that waterfowl grazing led to a substantial reduction in crop height during winter and early spring, but also that compensatory growth led to no significant effect on crop height at the time of harvest. In terms of grain yield, the effect of waterfowl grazing varied from non-significant to a 6 % loss, and exclosure experiments indicated that plots grazed both winter and spring had a protein content 9 % lower than ungrazed plots. While these figures express an economic loss to the affected farmers, they also indicate that substantial economic impacts from grazing geese and swans on winter wheat was rare in the study area. This may also be the case elsewhere in Northern Europe when most waterfowl abandon crop foraging in due time to allow for compensatory growth in late spring.

For 200 years, no wolves had been seen in Denmark. Then, in 2012, birdwatchers spotted a wolf trotting along in the countryside, having crossed over from Germany. Soon, a female appeared. Five years later, seven wolf puppies were seen romping across the land, like they belonged there. Now that qualified as a “pack".

Oct. 2020: Grant for experiments with barnacle goose management on Lolland-Falster

In 2019-2020, Aarhus University has carried out a number of studies concerning the management of barnacle geese in Guldborgsund Municipality on Lolland-Falster, funded by the Danish Environmental Protection Agency. As a follow-up to the project, the June 15 Foundation has now given a grant of 1.6 mill. DKK for a continuation of the project. The purpose is to find an efficient model for managing the barnacle geese, which occur in large numbers and which cause damage to agricultural crops. This must be done by laying out alternative foraging areas for the geese on beet fields after harvest and on salt marshes, respectively, combined with scaring away on fields where they cause damage.

You can read more about the experiment here.

In spring 2020, 20 biology students completed the course Wildlife Ecology and Adaptive Management at Aarhus University. The students undertook group projects that resulted in four suggestions for adaptive management plans. The plans were based on the theoretical framework for adaptive management and the biological and societal conditions characterising the issues at hand. The students interviewed a number of key persons among both scientists and authorities as well as other interested parties. Covid-19 prevented actual field work.

The course will give participants an introduction to the ecology and management of wildlife, focusing on mammals and birds, and working with the development of adaptive concepts for management. This includes sustainable harvest, management of problematic species, invasive species as well as conservation of threatened species and their habitats. The course is run by Centre for Adaptive Nature Management, Department of Bioscience.

Status of wolves in Denmark - In Danish

Possible hunting on the gray goose in August (Danish)

On a public meeting in the village of Idom Tuesday 22nd August the local citizens from Idom and Raasted expressed a strong interest participating in a Critical- Utopian Citizens Dialogue process on wolf-management. The meeting was organized in collaboration with the Village Committee of Idom-Raasted, two master students and Centre for Adaptive Nature Management at Aarhus University. The Critical- Utopian Citizens Dialogue process will during the next six months offer the local citizens the opportunity to formulate and express their critique and concerns regarding the wolves and the wolf- management. The citizens will also get the opportunity the develop their own visions and suggestions  for the future wolf management and, during the process, get answers to some of their questions in dialogue with the best available experts to ensure that the local ideas and suggestions are rooted in the best available facts and knowledge. 51 local citizens participated in the meeting and by the end of the meeting the first 36 had registered for the dialogue process starting up in September 2017.

The project is a pilot and it is the ambitions of the research team that the pilot will generate experiences useful for an upscaling of the project so that citizens in other areas close to wolf-areas will be offered the same dialogue- and learnings opportunity as in the Idom-Raasted area. It is furthermore the ambition that politicians and authorities, based on the experiences from the work, can be offered some better tools to involve local citizens in wildlife management and nature conservation in the future.

In collaboration with the The Village Committee of Idom-Raasted, two master students and Centre for Adaptive Nature Management at Aarhus University, citizens of Idom-Råsted was invited to participate in a public meeting on a possible future Critical- Utopian Citizens Dialogue process on wolf-management. The villages of Idom-Råsted is very close to the area where the first Danish wolf pack in 200 years was spotted earlier this summer.  If the local citizens are interested in such a dialogue- and learning process to be arranged in the area, they will within the next six months get the opportunity to formulate and express their critique and concerns regarding the wolves and the wolf- management. They will also get the opportunity the develop their own visions and suggestions for the future wolf management and, during the process, get answers to some of their questions through a dialogue with the available best experts on the field.

Læs interview til Weekendavisen her (PDF)

To celebrate this, a reception will be held, where we will give a short presentation of the centre, the vision, the organization and the participants.

At the reception there will be served smoked trout, pheasant patties and fizz.

Looking forward to seeing you. 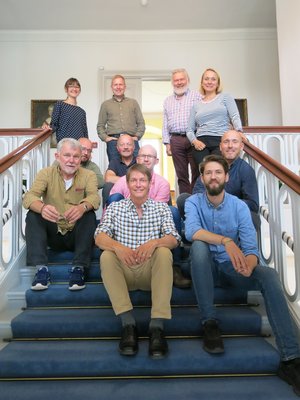 During 24-26 September, 2018, Centre for Adaptive Management gave a course in adaptive nature management for 13 managers, consultants and scientists involved with nature management in Iceland. The course was hosted by the Icelandic Department for Sustainability. Case studies involving management of barnacle geese, rock ptarmigans and wilderness area conservation were used to exemplify the application of adaptive management in practice. 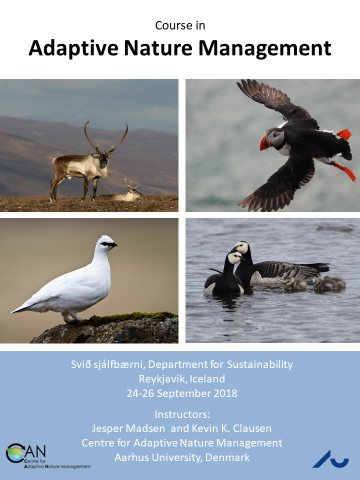