I chose the subject because there was an outbreak of pineapple mealybug wilt disease (PMWD) reported on pineapple farms in Uganda in 2010. The disease had reduced pineapple plant population on a number of farms in Central Uganda where most of the certified organic farmers are located. The situation created panic among farmers as their income was reducing. This created an opportunity for me to contribute to the management of pineapple mealybug and disease outbreak in organic farming systems.

I established that only one species of pineapple mealybug, pink pineapple mealybugs (Dysmicoccus brevipes) was infesting pineapples in Uganda. This species of mealybugs was infesting all parts of pineapple plant with varying population densities during rainy and dry seasons.  It was also established that organic farms had reduced mealybug infestation (an average of 11.5 mealybugs/plant) compared to conventional farms (56.2 mealybugs/plant). Organic farms conserved diversity of organisms and plants that promote stability hence checking the mealybug population.

Pineapple farmers practise pineapple – banana intercropping systems with the aim of addressing food security of the household. However, it was established that pineapple – banana intercrop greatly reduced mealybug infestation on pineapple.  Also, farms where crop rotation systems that include fallowing were practised, mealybug infestation were highly reduced.

Farmers in Uganda consider application of coffee husks as an essential requirement for pineapple production. Those who use it allow it to decompose it in a heap and covered with soil after application. I compared this practice with two fertilizer treatments. I found that plants under coffee husks treatment 35 fruits for every 100 fruits had mealybug on them compared to 62 fruits for every 100 fruits under foliar fertilizer treatment.  However, coffee husks are very expensive and many farmers cannot afford it. Therefore strategies that would avail coffee husks to pineapple farmers at affordable prices should be promoted.

The study is important as knowing the exact species of mealybugs infesting pineapples in Uganda, government through the researchers and extension workers design strategies for management of the pineapple mealybug wilt disease.

The findings of the study would benefit farmers more especially organic farmers as they would manage the pest using ecological intensification methods that promote diversity of organism. It will also benefit government as it can direct its research planning and funding efforts management of the pink pineapple mealybug since it is already known. Organic product exporters and consumers as more infestation free organic pineapple will be produced for the market.

There is need to establish the optimum banana plant population in a pineapple-banana intercrop that would effectively manage mealybugs without compromising quality of pineapple fruits. Native entomo-pathogens may be vital in the management of the mealybug and therefore there is need to evaluate them. Conservation and manipulation of predators especially ladybird beetles need to be developed in order to effectively manage mealybugs in pineapples. 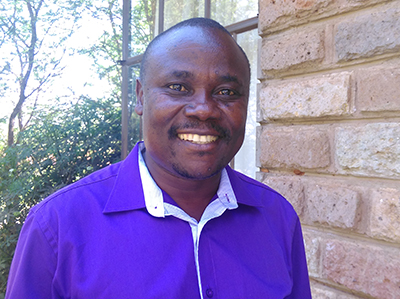 Samuel Kabi is expecting to graduate by the end of 2018. He is Senior Lecturer at Gulu University, Uganda where he is teaching Entomology and among other things holding pest management courses for agricultural and other related programmes. 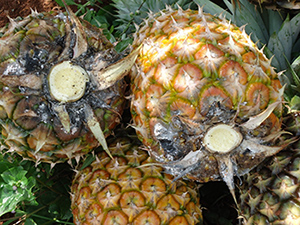 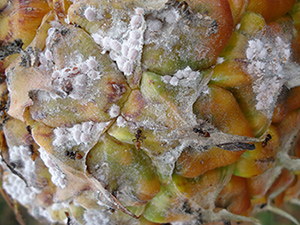 Pink pineapple mealybugs on a pineapple fruits with tending ants on them.