In 2009-2010, when the ideas and concepts of ProGrOV were developed, there was an increasing understanding that the challenges of producing enough food and biomass while preserving soil, water and biodiversity necessary for ecosystem services could not be solved by prevalent types of conventional agriculture and that agro-ecological approaches and ecological intensification could be a viable pathway for our future food production. Alternative ways of achieving higher agricultural productivity and stability of yields through so-called ‘eco-functional intensification’ achieved by higher input of knowledge, observation skills and management and improved use of agro-ecological methods / organic farming systems were brought into debate.

The International Assessment of Agricultural Knowledge, Science & Technology for Development (IAASTD, 2009) was one of the first global reports to opt for this. The report concluded that ‘business as usual is not an option’; that a fundamental shift in AKST is required to successfully meeting development and sustainability goals; that research, innovation and extension should account better for the complexity of agricultural systems within the diverse social and ecological contexts; and that an interdisciplinary and Agro-ecosystems approach to knowledge production and sharing will be important for solving these needs.

Around the same time the then UN Special Rapporteur on the right to food, Olivier de Schutter, promoted agro-ecological agriculture as a model that holds great promise for the roughly 500 million food-insecure household around the world, for example, in ‘The New Green Revolution: How Twenty-First-Century Science Can Feed the World’. In this article it is further stated that under-investment in the agricultural sectors in many developing countries has limited the necessary uptake of agro-ecological methods.

While agroecological or organic farming at local level has the potential to improve the local food security, its potential for economic development though income generation and employment has proven more difficult to achieve due to lack of access to markets or difficulties for small-holders in being integrated in the value chains and sharing the benefits of targeting a high value market.

The need for improving the organic farming systems as well as better connecting the primary production with the markets was the driver for the initiation of ProGrOV. Although there are several initiatives that support the development of the organic sector, the need for scientific documentation and development of all the segments of organic value chains (primary production, processing, market development, etc.) is still high.

It seeks to minimise the use of external inputs, avoiding the use of synthetic drugs, fertilizers and pesticides and aims at optimising the health and productivity of interdependent communities of soil life, plants, animals and people. It builds on East Africa’s rich heritage of indigenous knowledge combined with modern science, technologies and practices. (East African Community (2007), East African Organic Products Standard (EAOPS))

Read more in the fact-sheet ‘How organic agriculture contributes to economic development in Africa: market-driven development of organic high value chains’ developed for Danida in 2010. 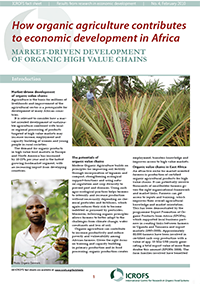