The Future Rotations Explorer from the PREAR project

The FACCE SURPLUS 1st call project PREAR (Predicting and enhancing the Resilience of European Agro-ecosystems to environmental change using crop Rotations) presents their Future Rotations Explorer – a tool designed to support co-creation of rotations that will be suitable in future climates.

One of the characteristics of arable landscapes across Europe is that they are an annually changing patchwork of crops. This is because arable crops are grown in rotations – specific sequences of crops grown in a field that are designed to achieve specific agronomic purposes - and farmers plan rotations of arable crops, rather than planning crop-by-crop and year-by-year. The Future Rotations Explorer is a tool designed to support co-creation of rotations that will be suitable in future climates.

Arable croplands across Europe are being, and will be, affected by climate change. Therefore, farmers may need to change the crops that they grow – taking advantage of crops that are newly suitable in their location, or avoiding crops that have become unproductive due to the impacts of climate change. A lot of research has been undertaken to predict the suitability of crops in future climates. But because farmers plan in terms of rotations, they will need to adjust whole rotations, rather than just changing individual crops.

In the PREAR project, we sought to design rotations that will work effectively for farmers in future climates. When we engaged with farmers in this process we realised that for future rotations to be acceptable, the farmers needed to be involved in the process of co-creation. We also found that farmers did not tend to engage with ‘academic’ scenarios of climate change. This left us with the challenge of interacting with farmers in a meaningful way so that they could propose potential crop rotations in future climates, and we addressed this by developing the Future Rotations Explorer.

The Future Rotations Explorer allows users to explore climate change effects for arable crops in their region, and allows users to see the predicted changes in yield for crops across Europe. This is especially valuable in focus groups with farmers, as we have done in the PREAR project, so that they can explore different types of rotation, looking at the overall impact on yield and co-creating acceptable future rotations that can be explored. The Future Rotations Explorer also presents maps of predicted change in yield across Europe and so, in conjunction with other datasets and tools (for example those produced by the European Commission’s Joint Research Centre and many other research projects) it can be used in policy for assessing the risks to arable farming caused by future climate change.

(We constructed the maps of predicted change in yield for eight key arable crops in 12 x 12km grid squares with arable crops, using the WOFOST crop growth model and the latest UKCP18 ensemble climate predictions for Europe. This allowed us to predict the change in yield for crops outside of the places where they are currently grown.) 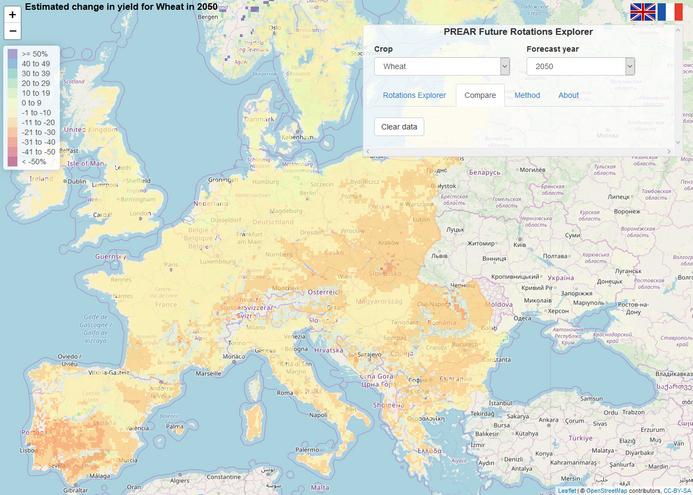 Report from the Status Seminar in September