All licensed Danish hunters are legal required to report the number of individual huntable species they have shot annually at the municipality level. These hunting bag statistics (vildtudbyttestatistik) are collected nationally by the Danish Nature Agency and processed by DCE - National Center for Environment and Energy at Aarhus University (AU), the body also responsible for maintaining the national database. This data was used as the basis for populating the model (Vejlerne) with goose hunters.

Table 1. Number of hunters having shot in the municipalities of Jammerbugt and Thisted, and whether resident or not.

In addition to this initial analysis we obtained and analyzed several years’ worth of data from the Danish hunting bag statistics. This showed that although the average number of hunters per year was approximately 1200, just over 2500 hunters in total shot geese in Jammerbugt and Thisted between 2012 and 2015 (Figure 1). In addition, when looking at those hunters who shot geese in one year and went on to shoot geese the next year, only approximately 55% did so (Table 1). This analysis suggested that the potential pool of hunters was significantly larger than our initial estimate; potentially a twofold increase in the number of hunters to be allocated hunting locations. 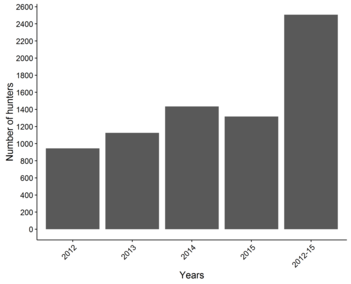 Figure 1. Number of hunters who shot geese shot in Jammerbugt and Thisted municipalities, annually and in total between 2012-15. Although it is compulsory for Danish hunters to report their hunting bag, in 2014 there was a legislative change which obliged reporting before annual hunting licenses would be issued to hunters. In addition, in 2014 the hunting season was extended for 3 of the 5 huntable goose species by one month (prior to 2014 the hunting season ended 31 Dec, but was changed to 31 Jan). These, developments are likely to have contributed to the rise in the number of hunters reporting shot geese in this year and 2015.