The capacity of humans to acquire knowledge of what is actually true is relatively well understood. For example, by visual perception we are able to acquire knowledge of the actual spatial location of the objects within our field of vision; by memory, we are able to recall events that actually took place in the past; etc. But humans are not only interested in actual truths. Often, we are also interested in what could be the case (possibilities), what must be the case (necessities), and what would be the case, if something else, which is not in fact the case, were the case (counterfactuals). Propositions of these kinds belong to the class of modal propositions, i.e. propositions whose truth holds with a different modality than mere actuality. Knowledge of such modalities cannot be acquired in a direct way by any of the usual and basic cognitive pathways, such as perception. No amount of observation of some particular fact will tell one whether that fact obtains with necessity, or whether it would have obtained if some other fact had obtained. Instead, knowledge of such facts seems to require reasoning and cognitive faculties of a decidedly shakier kind, involving inexact and ill-understood operations such as imagination, intuition, and mental simulation.

Modal matters permeate both everyday and scientific thinking. In everyday contexts, to name but a few examples, modal thinking is involved when we determine the possible outcomes of some action or event. It is involved whenever we assess whether some conclusion can be inferred from some premise, since assessing this involves determining whether the conclusion must be true if the premise is true. And it is involved when we pass judgment on whether we know some proposition, since this involves assessing the relevance of the possible scenarios in which we are wrong. In scientific thinking, modal facts are particularly central to the mathematical sciences, which are interested in the necessary relationships between quantities. But the empirical sciences are equally dependent on modal knowledge and theorizing, and not merely in virtue of relying on mathematics. For example, many if not all empirical sciences are interested in uncovering causal relationships, which involve discovering counterfactual dependencies concerning what would happen to some condition if some other condition were to change; similarly, the importance to scientific practice of thought-experiments in which certain configurations of facts are imagined to obtain is well documented.

A striking characteristic of recent work on modal epistemology is its increasingly cross-disciplinary outlook. Philosophical research on modal epistemology has traditionally focused on purely conceptual issues concerning the relationship between the intuitive conceivability of some proposition, and its modal properties. But in recent years, philosophers have become sensitive to the relevance of empirical research on the cognitive basis and prevalence of intuitive judgments to modal epistemology. In cognitive psychology, which only relatively recently became interested in modal cognition, there are a number of recent examples of researchers drawing on the pioneering work of philosophers to make advances in the field, and the importance of modal thinking is becoming increasingly recognized by evolutionary psychologists, who see the capacity for rational imagination and reasoning over non-actual future scenarios as a unique, driving factor in human evolution.

The purpose of the present project is to contribute to this emerging interdisciplinary research on modal epistemology, by focusing in depth on six well-defined and inter-related questions within the field. Each subproject is concerned with the nature of modal knowledge and cognition as it appears in a specific area of application. Since all the subprojects in their different ways attempt to address the problem of modal knowledge in a context where findings of other disciplines, such as cognitive psychology and the history of mathematics, constrain the philosophical research, they share both their basic problem and their methodological challenges.

For details about the individual sub-projects, read more HERE.

The research project is funded by a major Danish Council for Independent Research Starting Grant, with supplementing funding from Aarhus University, University of Copenhagen, and University of Southern Denmark. The Research Council grant is part of the Sapere Aude research training program. 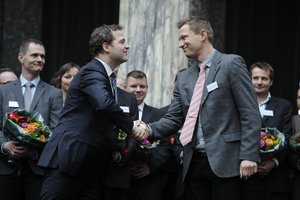 The research project spans the three largest university in Denmark. The project's center of gravity is at Aarhus University, at which teh Principal Investigator Dr. Asbjørn Steglich-Petersen, Dr. Jacob Busch, and doctoral students Sara Kier Praëm and Asger Steffensen are all located. The remaining members of the core project group Dr. Mikkel Gerken and Dr. Nikolaj Nottelmann are located at the University of Copenhagen and the University of Southern Denmark, respectively.

The project is divided into six individual sub-projects. Each sub-project is concerned with the nature of modal knowledge and cognition as it appears in a specific area of application. Since all the sub-projects in their different ways attempt to address the problem of modal knowledge in a context where findings of other disciplines, such as cognitive psychology and the history of mathematics, constrain the philosophical research, they share both their basic problem and their methodological challenges. The group will thus provide fertile ground for collaboration and mutual support in carrying out the six research projects.