Keeping an eye on the fly

European researchers are joining forces to develop a new and more efficient method for monitoring the fruit fly Drosophila suzukii.

The fruit fly Drosophila suzukii and its larvae has become a serious pest in many soft-skinned crops since its spread to Spain and Italy in 2008 affecting many commercial fruits such as cherries, berries and grapes.

The first step in controlling Drosophila suzukii – also known as Spotted Wing Drosophila – and preventing crop damage is recognising that the fly is present. Current monitoring systems are costly, time-consuming and labour-intensive. In addition, they are conducted at a low spatial resolution and prone to errors.

Scientists from three different research institutions in Switzerland, the United Kingdom and the Netherlands have therefore joined forces to develop an efficient and accurate monitoring system to assist in the control of Drosophila suzukii in soft fruit crops.

The new research project is a collaboration between Johannes Fahrentrapp from the Zurich University of Applied Sciences in Switzerland, David R. Green UCEMM at the University of Aberdeen in Scotland, and Lammert Kooistra at the University of Wageningen in the Netherlands. The three-year project, entitled Automated Airborne Pest Monitoring (AAPM) of Drosophila suzukii in Crops and Natural Habitats, has a total budget of €282,996 and has been granted €257,996 through the C-IPM second call.

The various strategies growers use to control Drosophila suzukii necessitate monitoring of the fly. Control methods include mass trapping, nets to cover the crop, application of clay and lime products as well as insecticides, early harvest, and sanitation.

Monitoring is currently conducted by placing cup-style traps containing a liquid bait. This is time-consuming and labour-intensive, cannot be used for continuous monitoring or monitoring of a large area, and is not suitable for areas that are difficult to access.

The aim of the new project is to develop a novel system to overcome current monitoring limitations. To this end, the project partners will use a combination of sticky cards, drone-mounted cameras and automated image processing techniques.

Once the flies get their feet stuck in the glue they will be photographed using high resolution cameras mounted on autonomus drones that will ”hop” from trap to trap collecting the imagery. Male Drosophila suzukii are easy to identify with the naked eye because of their spots – hence their alias Spotted Wing Drosophila. Software trained to analyze the images captured will be used to identify and count the number of target insects. Thereafter, the collected data will be transferred to a decision support system to provide valuable information for growers in a meaningful and accessible format.

The new system has several advantages over the current one: it can be used to monitor a variety of habitats, including those that are difficult to access. It is also less labour-intensive, can be integrated into decision support systems automatically, can monitor populations over large areas, and can provide many more samples. 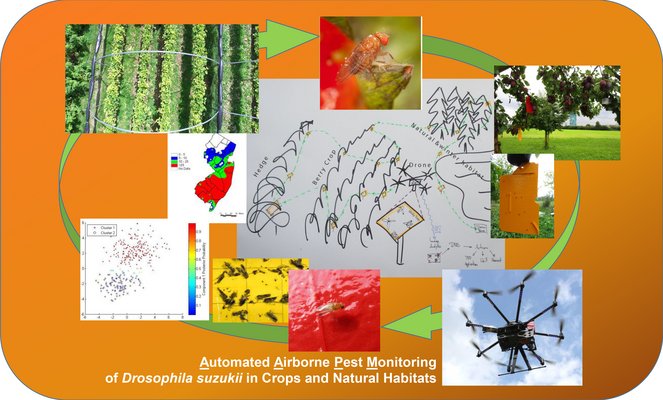 See the list of all the projects approved in the second C-IPM call here.