The first ERA-net C-IPM workshop focused on current and future challenges for IPM with special regard to policy, market, research, and climate change.

What are the major challenges facing a constantly changing European agriculture with respect to implementation of integrated pest management (IPM)? This issue was the theme behind the first workshop held by the ERA-net C-IPM at the Julius Kühn Institute in Berlin on 8 October 2014. Approximately 50 participants representing policymakers, agricultural advisors, government officials, R & D organisations, researchers and stakeholders from 14 European countries attended the workshop.

The overall objective was to identify and address long-term needs and strategies for national and transnational IPM research programmes and ensure the emergence of cutting edge, far-sighted and innovative approaches. C-IPM coordinator, Antoine Messean from INRA, France, introduced the four core approaches to the workshop: 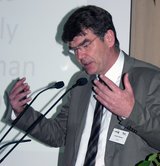 Thereafter, four talks were given that addressed some of the major issues affecting agriculture in the future with regard to the first three of these pillar areas.

The effect of legislation

Policy advisor Johan Edens from the Netherlands Food and Consumer Product Safety Authority (NVWA) spoke about pesticide legislation and the availability of pesticides. He stressed that pesticide legislation affects several issues. Not only does legislation reduce pesticide use; it can also lead to a need for developing new and alternative methods and criteria for conventional plant protection products.

As a consequence, there will be a further decrease in the availability of conventional pesticides. Legislation also has positive effects on the decision to have a fast track approval procedure for low risk pesticides in the future, zonal evaluation rather than national evaluation, and easier access to mutual recognition.

This talk was followed by one given by senior researcher Kim Martin Hjort Lind from the Department of Food and Resource Economics, University of Copenhagen. His topic was whether the EU Common Agricultural Policy (CAP) Reform 2014-2020 with its greening initiatives will promote IPM adoption. The CAP reform has introduced a level of greening measures in addition to cross-compliance measures and has been reoriented with a more targeted focus on environment, biodiversity and climate. 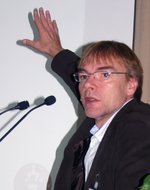 The objectives of the Common Agricultural Policy (CAP) are:

Implementation of the new CAP awaits Member States deciding on which policies and measures to use as well as assessing the amount of area eligible for the various options. Kim Martin Hjort Lind concluded that the effect of the CAP reform can be a divergence of agricultural policies in Member States and that the CAP’s effects on environment, biodiversity and climate are still uncertain.

The power of the consumer

The third of the plenary talks was given by Wim Rodenburg from the Dutch Produce Association (DPA). He addressed the question of whether consumer preference will influence implementation of IPM. He referred to a survey conducted in the Netherlands, Germany and United Kingdom that elucidated the factors that influence consumers’ choices when they purchase fresh fruit and vegetables. According to the survey, taste, price and quality are at the top of the consumers’ list of priorities whereas how the products are produced is less important.

Another survey, conducted by Nestlé, showed that the three things consumers state they are most willing to pay extra for are good animal welfare, no child labour and no GMO. Many also stated they were willing to pay extra to avoid products that are free of chemical pesticides – which the consumers regarded as being much more important than saving energy.

Wim Rodenburg pointed out that, at the present consumers can only choose between organic or non-organic – there is nothing in between, such as “IPM products”. For this reason, marketing products as IPM can be difficult, because the concept is complex and comprises many things.

Climate change can also affect the movement and establishment of native and invasive pests. The question of whether climate change will promote the adoption of IPM was presented by Giuseppe Stancanell from the European Food and Safety Authority. He outlined the potential effects of elevated concentrations of CO2, warming and drought on beneficial plant-microbe interactions and also pointed out that climate change will have an effect on plant health. Climate change can also promote the spread, establishment and impact of populations of invasive species, including vectors. 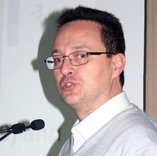 Giuseppe Stancanelli highlighted that the risk of invasive alien species should promote IPM research and development. In particular, mitigation of the risks of invasive alien species in agriculture and forestry will need risk assessment studies in order to provide predictions and early warnings, and to integrate pest risk assessment and IPM research.

Following the plenary session, four questions were discussed with regard to the above topics and their potential role as a driving force for the implementation of IPM in European agriculture. The workshop participants were divided into four groups in a world café setting, where each group discussed and summarized conclusions regarding the individual question and then rotated and addressed the next questions. That way all groups discussed all the questions. The topics the groups discussed were:

With regard to the first discussion on policy aspects, the general agreement was that the number of available pesticides will continue to decrease in the near future as a consequence of the EU pesticide policy. This will increase the demand for alternative solutions. Hence, the willingness for IPM implementation will increase. If pesticides are removed from much faster than IPM guidelines development, farmers will face major problems. There are initiatives in the CAP which can promote implementation of IPM measures even though implementation of IPM is not part of the CAP.

As to whether climate change will promote or impede IPM, it was concluded that it is difficult to be precise, as other drivers affecting IPM cannot be separated from climate change. However, most of the participants agreed that climate change will encourage the development of early warning systems for forecasting and pest monitoring and promote research to create knowledge for better understanding of the biology and epidemiology of pests and their natural antagonists.

It was concluded that it is important to distinguish the role of global change from that of climate change. While increased global trade can promote the introduction of invasive pests into a given region, climate change affects their potential establishment and impact. Hence, the most critical situations are created when global change is coupled with climate change.

With regard to the third question on the role of consumers and retailers, it was noted that the minimum residue level (MRL) requirements of some retail and supermarket chains, which basically concentrate on 3-5 major global players, are counterproductive to the IPM concept with regard to resistance management, use of selective pesticides, the use of treatment thresholds and environmental sustainability.

The perceived risk by consumers, which is promoted by NGOs and the media, is a clear driving force to MRL settings below the actual legal thresholds. It is important for the agricultural business to engage in the public discussion with facts about IPM to ensure a broad and multidirectional discussion.

As for the role of research and knowledge transfer, one of the main conclusions was that instead of a narrow focus on specific crop-pest-time relationships, IPM implementation will benefit from a more broad system approach in research for long-term. For many crops we already have substantial knowledge of the individual crop-pest relationships, but lack the overall research to combine them into system guidelines with a focus on sustainable and resilient farm systems.

The organiser of the workshop, professor Per Kudsk form Aarhus University, was very satisfied with the workshop.

- It was a productive and fruitful meeting. The presentations in the morning were excellent. I was also very impressed with the world café discussions during the afternoon. Everyone participated actively and there were numerous good viewpoints and ideas that we can use in our work on the C-IPM Strategic Research Agenda, says Per Kudsk.

Read more details from the workshop in the report here.

The presentations from the workshop can be viewed on the C-IPM website here.